Even though September is just around the corner, fishermen are still pretty active fishing the lakes.
Kristinn Helgi Sveinsson visited lake Elliðavatn, that is just few minutes driving from Reykjavik, on night last week.  He witnessed many trouts jumping  all around the lake and for him that alone was a pleasure.  He was trying with the fly but nothing happened so eventually he caught one 4 pounds on the worm bait.  The trout was 58cm. 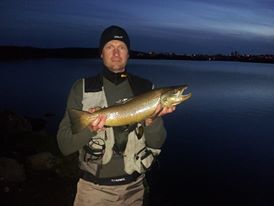 Kristinn Helgi with a nice brown trout he cauhgt on the 20th of August in lake Ellidavatn..
The beginning of September is quite beautiful.  It is amazing to fish into the twilight zone, and ofter that is the prime time of the day to catch the big brown trouts.
Tight lines!
Veidikortid