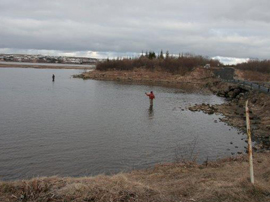 Elliðavatn is located in the outskirts of Reykjavík and the neighbouring Kópavogur, within the boundaries of the Heiðmörk outdoor recreational area.

Distance from Reykjavík and the nearest township

The Elliðavatn is divided between the municipalities of Reykjavík and Kópavogur. The lake can be accessed from the Heiðmörk by-way, through Kópavogur and the Vatnsendi area. Accessing the Hólmsá river, a tributary to Elliðavatn, is through the Heiðmörk by-way on the way to the Gunnarshólmi by-way, or turn north at the junction to the east of Gunnarshólmi. One can also park the car near the Hólmsá bridge at the Suðurlandsvegur (Ring Road to the Southern Part of Iceland), near Heiðmörk, and walk either upstream or downstream.

Elliðavatn is the most popular fishing lake around the Reykjavík area. It lies 73 mtr. above sea level and covers about 1, 8 km2 and has the maximum deep of 2 metres with an average depth of 1 metre – as strange as that sounds. This lake has two main tributaries, the rivers of Bugða and Suðurá, which are the two streams of the unified Hólmsá river further inland.

Fishing is allowed in the lake itself, Elliðavatn, at the banks of the Elliðavatn and Vatnsendi properties, as well as Hólmsá and the Nátthagavatn lake further inland. Fishing in the Suðurá river is prohibited, as well as within the 50 metres limit from the Elliðavatn dam.

One can naturally seek accommodation in Reykjavík, there is however a nice guesthouse at Kríunes in the Vatnsendi property, very well suited for this particular purpose. For those who prefer to fish at Hólmsá, accommodation can be found at Gunnarshólmi.

There is an excellent prospect for brown trout fishing, sea trout, sea char and even salmon. Trout has for a long time been the predominating species in the lake, however, sea trout is slowly taking over. Salmon and sea char enter the lake by the Hólmsá and the Elliðaár, even fairly large, or up to sex pounds.
Fishermen are asked to submit fishing reports to the Veiðikortið, www.veidikortid.is.

The season starts on the first day of summer (mid-April) and ends at 15 September.

Only fly, worm and lure are allowed.
We recommend flies such as Tailor, Mobutu, Peter Ross, Black Ghost, Dentist, etc.

Best time of the year

The catch is consistent all season, but May seems to be the popular even if the catch is equally distributed between May, June and July. The best way of catching the sea char is very early or very late in the day.

Littering is strictly forbidden and also is. That goes for regular litter as well as issues such as fish offal and fish slime. We also urge cardholders to show a good example and pick up litter left behind by somebody else. Off-road driving is strictly forbidden, as well as  boating for whatever purpose, except with permission, such as from the boat rental at Kríunes. Private premises are not to be violated. Fishermen must respect the "three metres rule" wherever applicable.  Sea char marked for scientific purposes shall be reported to www.laxfiskar.is

Cardholders shall show the warden all necessary papers, including the Fishing Card and appropriate ID, if asked for. The Fishing card shall also be displayed at the front window of the fisherman's vehicle.
<<  CLICK HERE FOR A MAP OF THE AREA >>
{pgsimple id=33|caption=0|tsize=medium|tmax=20|imax=200|close=1}
{weather 111}