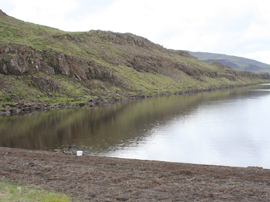 You can choose from three lakes in Svínadal in Hvalfjarðarsveit.

Distance from Reykjavík and the nearest town:

Distance from Reykjavík is about 82 km if you go through the tunnel under the Hvalfjord. The lakes are about 27 km from the town Akranes. For inhabitant from Reykjavik it it a brilliant idea to skip the tunnel (on highway 1) and drive the Hvalfjorður, that has a spectacular view.  That road only takes 15 minutes more.

The three lakes you can fish in is Geitabergsvatn, Þórisstaðavatn and Eyrarvatn. They are all part of a water system including the salmon riveer Laxá í Leirarsveit. Salmon can be cought in the lakes.  Lake Þórisstaðavatn is biggest of those three, 1.37 km2 and it rises 71 m above sea level. Greatest deepth of that lake is 27 m.

Fishing is allowed in all lake Þórisstaðavatn and Geitabergsvatn but only the north part of lake Eyrarvatn.  Please note that it is forbidden to fish close to the rivers.

There is a nice organised camping area at the farm Þórisstaðir where you can buy access to. You can also rent summerhouse and a trailer there.

There is a good prospect for brown trout and char fishing. Occasional salmon are cought there though every year..

Fishing is allowed from 7 am to 11 pm. After 20th of August fishing is only allowed until 9 pm in the evening..

The fishing season is from 1st of April until 25th of September..

Fly, worm and lure/spinners is allowed in the lakes..

Best time of the year:

The catch is consistent all season.

Very good access is to the lakes, especially Þórisstaðavatn and Eyrarvatn.  Those two are very convenient for families with small children.

Fishing is forbidden in the rivers, Þverá and Selós. All traffic close to the rivers is forbidden.  Cardholders must sign in at farm Þórisstaðir and show the Fishing Card and appropriate ID. Children under 14 years are allowed for free, if accompanied by adult cardholder.